“I feel like the romance is never the central story. I love a good love story. That’s one of my favorite parts to write. I think there can be a lot of different facets to a person’s life, and that can be one of them. . I also try to put my characters (in a place) where they’re fighting an inner battle too. ”— Kristy Woodson Harvey

Kristy Woodson Harvey’s used to book ideas coming to her at odd times.

The most recent inspiration happened when she was her cousin’s matron of honor.

As they were getting ready in the bridal suite and she was placing the mantilla on her cousin’s head, she was struck with an idea: why not write a book about a fictional family and a wedding veil that’s been in their family for generations?

The veil that inspired the book idea was a family heirloom from Ms. Harvey’s husband’s family.

“It’s a handmade mantilla and has really exquisite lace,” she describes. “It’s really special. You can see… the very intricate detail work that went into it.

“My sister-in-law had worn it. She passed it on to me and I wore it (for my wedding.) It was a nice little bridge between his family and my family on my wedding day.”

When her cousin told her she was getting married, Ms. Harvey offered the use of the veil. 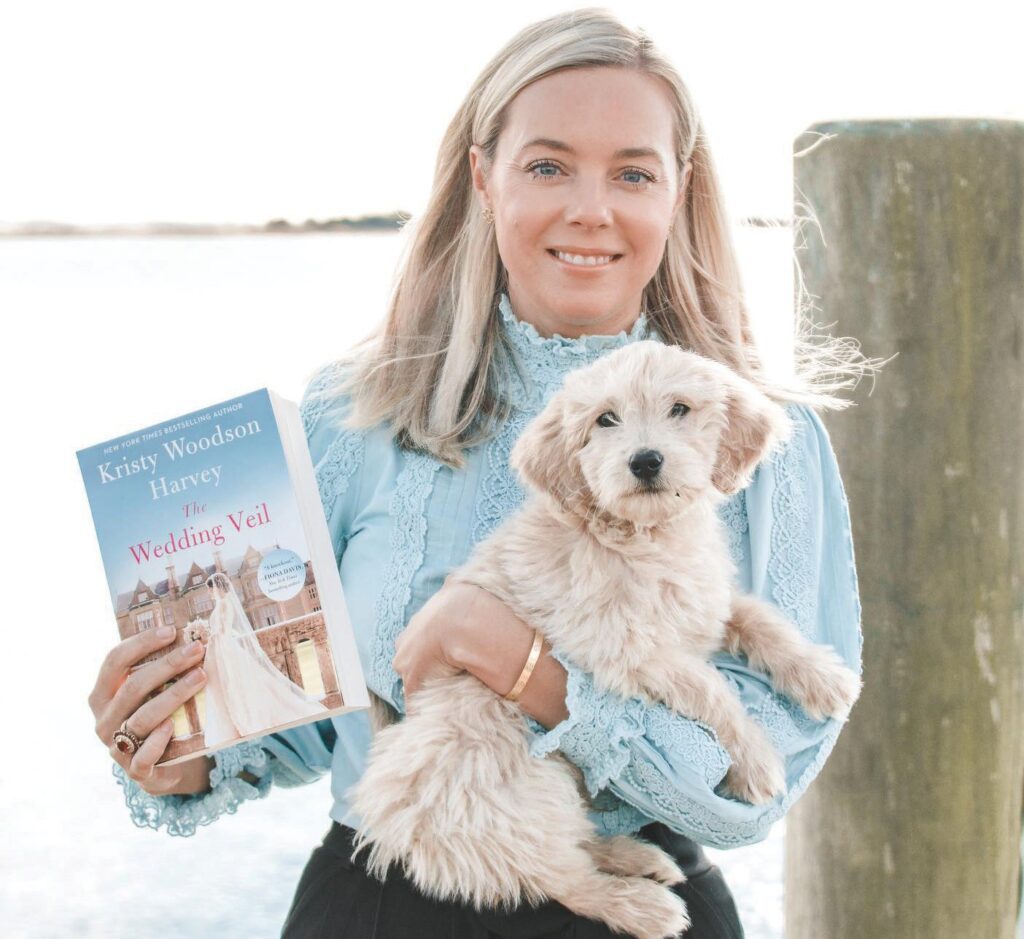 “It was a nice connection between all these women,” she says.

She envisioned a novel in which a family wedding veil was used by various generations of women.

Her agent liked the idea, but suggested she write about a real, historical wedding veil.

Ms. Harvey didn’t think such a thing was likely, but she’d been intrigued by the life of the Vanderbilts at the Biltmore. One night, unable to sleep, she sat down at her computer and found some information that sealed the deal ..

“The thing that brought it all home was, I did a random Google search about the Vanderbilt wedding veil,” she recalls. “And a great story came up (about how) Edith (Vanderbilt), her three sisters and her daughter Cornelia had all worn the same wedding veil.

“Then it disappeared. And I thought: Combine a historical story with a contemporary one and have the wedding veil be at the center.”

The result: her latest novel, “The Wedding Veil” ($ 27, Gallery Books), released on March 29. Ms. Harvey will be speaking about it at a number of Southwest Florida venues.

On 2 pm Friday, April 1, she’ll speak at Blackburn Hall at the Sugden Community Theater in Naples as part of The Beach Series, sponsored by Friends of Collier Library. (Tickets are $ 55 for current members of Friends of the Library of Collier) County. Memberships begin at $ 30.) Later that day she’ll be at MacIntosh Books on Sanibel Island from 6-7 pm

The next day, Saturday, April 2, Ms. Harvey will appear at a drop-in book signing (with mimosas) from 10 am to noon at Copperfish Books in Punta Gorda. (See the In the know box for more details on these events) .)

Writing about the Vanderbilts

“The Wedding Veil” is structured with multiple narrators and multiple time lines.

But the most difficult part, she says, was dealing with the pandemic.

When she sat down to start writing her novel in March of 2020, she planned on going to the Biltmore — a place she’d visited while growing up — “and all these other great places.

“And then the world shut down.”

But, she says philosophically, “It turned out the way it was supposed to. I did as much reading as I could. I joke that I read every newspaper article that ever had the name Peter or Cornelia Vanderbilt in it.”

The weekly hour-long show continues and can be watched live at 7 pm Wednesdays (or viewed afterwards) on Facebook and YouTube. The show will launch Ms. Harvey’s “Wedding Veil” on March 30.

The five also did daily “writing sprints,” holding each other accountable for 2,000 words a day.

“They were a huge support system for me,” she says.

By the time Ms. Harvey had finished her first draft, the world had opened back up a little, and she was able to visit the Biltmore and go to libraries in person.

“I already knew my story was only covering 1914-1934,” she says. “It gave me the opportunity to fact-check and be able to get some of those colorful little anecdotes and stories that really brought the book to life.”

While Ms. Harvey’s novels have romance in them, “I feel like the romance is never the central story,” she says. “I love a good love story. That’s one of my favorite parts to write. I think there can be a lot. I also try to put my characters (in a place) where they’re fighting an inner battle too. ”

The Biltmore, home of the Vanderbilts and the largest privately owned home in the US, “is mind-blowing,” she says. “Just the sheer size of it, even in comparison to other really incredible homes and sites in the world. so huge, the land around it and the mountains and the gardens. It’s truly a marvel! ”

She’d grown up a few hours from the Biltmore, which is in Asheville, North Carolina. (The Estate is on the National Register of Historic Places and is a National Historic Landmark District.)

“I wanted to know more about these women,” Ms. Harvey says. “I had read about them, as much as I could. I was surprised no one had written a novel about them. I kept saying,’Someone should write about these two amazing women.’

“I never intended for it to be me, but here we are.”

She also didn’t plan on writing another novel in her Peachtree Bluff series, but wound up doing so during the pandemic as well.

She’d already published three books in the series — “Slightly South of Simple,” “The Secret to Southern Charm” and “The Southern Side of Paradise” – and had no plans to write more.

But readers kept writing her, asking for another Peachtree Bluff novel. They loved the strong women characters and the cozy, comforting feeling the books give.

She initially began writing the series for herself.

“I was just writing sort of a modern Southern story,” she says. “I remember saying to my editor,’I want to write a town where even if years later, people didn’t remember the story, they remembered how Peachtree Bluff made them feel.’”

But the unexpected fourth book of the series, “Christmas in Peachtree Bluff” ($ 28, Gallery Books), which came out in late October 2021, was for the readers. But also, she admits, for herself.

“I wanted to go back to Peachtree Bluff,” she says. “The long and short of it, I wrote the Christmas I wished we were having.”

E! Online called the book “the equivalent of a warm and fuzzy pair of socks.”

“There was something about the pandemic. I started to get (the appeal of series),” she says. “There’s something really special about falling into a place you love and characters that you know.”

Ms. Harvey couldn’t have her typical Beaufort Christmas, but she could experience it while writing about it. She wrote the first draft in a flurry, in just three weeks.

“I wrote the Christmas we would’ve been having in a regular year,” she says.

Christmas in her town of Beaufort, NC, is a big affair. There’s the Festival of Trees, the Light up the Night Christmas Boat Parade, an annual Christmas Parade and even a golf-cart Christmas parade.

Ms. Harvey borrowed some of those holiday traditions for Peachtree Bluff, and made up one of her own.

For Starlite, Star Bright, Peachtree Bluffians go out on the water on Christmas Eve in canoes, kayaks, rowboats, dinghies and other engineless boats. Then, they light candles and sing Christmas carols while on the water, ending with “Silent Night.”

With COVID restrictions lifted, Christmas returned to Beaufort in 2021, and Ms. Harvey was the Grand Marshal of the Beaufort Christmas Parade. She rode in the back of a black convertible, waving and throwing candy.

“It was a good, old-fashioned parade,” she says.

But in addition to celebrating the release of her latest novel, “The Wedding Veil,” Ms. Harvey has something else to celebrate: her Peachtree Bluff series will come to the screen, as they’re in development with NBC.

“I don’t know what we’ll end up with,” she says. She’s co-written the pilot with Caron Tschampion and Sheryl Anderson, writer and showrunner, respectively, from “Sweet Magnolias.”

“It was a steep learning curve for me,” says Ms. Harvey, who’d written one other script with a friend a couple years ago.

“I’m used to working on my schedule, on my time. But it was fun writing with a group. That was the most different part, for sure. I’m so used to writing alone.

“It was different, but fun. Everything you write is dialogue-heavy, no description. You’re trying to convey inner thoughts through dialogue, glances off-camera, body language, that sort of thing.”

She can’t give more information about it yet.

“There’s nothing more I can say about it now,” Ms. Harvey says.

“We’re not quite there yet, but we’ll have some fun updates soon.”

And Ms. Harvey, who is always working on her next book, shares that she has an idea for yet another Peachtree Bluff book.

But fans should take heart.

“I do have an idea for another series,” she says.

“The more I do, and the more I learn, the more I realize that everything –absolutely everything — is a story. It’s all material. I guess that’s why I’m always working on my next novel. I hope that never ends. ”¦